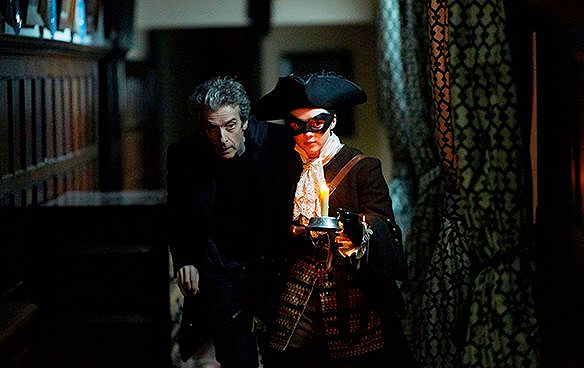 I think this one reads quite grumpily. So, I’m sorry about that, but there it is…

Some stories begin life as an impetus. This isn’t fact by any means, but I can imagine at some point in the last 18 months Steven Moffat was rolling around Genesis of the Daleks in his mind and suddenly had the thought: “Actually, what would happen if the Doctor had a chance to kill Davros when that evil scientist was just a boy?” And then that became a tale he had to tell.

The Woman Who Lived, by Catherine Tregenna, feels to me anyway, as if it’s lacking that impetus. That no one would arrive at their keyboard in a white heat, compelled to get down a story in which the Doctor meets up again with a girl he turned into an immortal and then they go looking for an amulet, which lets aliens through, but then they repel the aliens. While in terms of function (moving the Doctor/Me relationship from A to B to C) it’s a total success, the form lets it down.

It’s a shame, because every round of the debate between the Time Lord and Lady Me is scintillatingly written. In her pleas to be allowed to join the Doctor in his travels, she makes plain the cruelty he’s inflicted upon her. “I look up to the sky and wonder what it’s like being out there,” she says – surely the same thought which originally compelled him to leave Gallifrey. “You’re the man who runs away,” she says – and indeed he is. But while he flits around, filling his senses, constantly outpacing consequence, he’s consigned her to the kind of exile on Earth he himself once battled to escape. “I live in the world you leave behind.” However you want to deconstruct that sentence, she’s right. Even the comedic line about it taking a day to get to Kent works well in defining the limited parameters in which she’s forced to exist. How can he justify keeping her imprisoned? All the Doctor can offer is that to let her fly “it just… it wouldn’t be good.”

In this, plus the glimpses of Me’s last 800 years, there is tangible sadness. The image of empty cots is all that’s required to convey the horrific bereavement she suffered, and it’s understandable she would cauterize the wound by withdrawing from further emotional engagement. From even defining herself in terms of how she might relate to someone else. “Me is who I am now. No-one’s mother, sister, daughter, wife. My own companion. Singular, unattached, alone.” It makes the Doctor’s ambitions of trying to fix her seem unbelievably trite…

Except, that’s what seems to happen. Perhaps it’ll prove to be a fake-out on her part (and if so, where’s the drama in that?), but towards the story’s end, when the purple rays of death (of which more in a moment) peck at the townsfolk, she seems to have an epiphany. Declaring – because there’s no way this could be written so that her actions alone made clear the complete volte-face – that suddenly she actually cares. Great, let’s break out “the light of immortality” (colour: yellow) to counteract whatever’s happening with those spaceships, and then it’s off to the Swan With Two Necks for a beer.

This is the problem. There’s a thinness of concept to the plot which renders it almost opaque in comparison to the discussion it’s supposed to envelope. What have we got? Some messing about, a creaky-faced monster and an all-powerful (although we’ve never heard of it before) amulet. Groo. ‘Amulet’. The kind of trinket that gets dropped into a tale in lieu of something more fascinating. The guffiest of MacGuffins. And on this Saturday, the Doctor did declare, “Purple! The colour of death!” Now, historically and in some cultures, yes, there is something in that. But exclaimed as some kind of cod-explanation for an alien laser beam… it’s wrongly ridiculous. Attached to this are cursory phrases like ‘rift’ and ‘spaceships’, which struggle to light up the imagination. There’s also a lion monster called Leandro who claims to be the last of the Leonians. Which I initially heard as linoleum. Of course, Doctor Who serves up such nonsense every week, but it’s normally more gilded, more purple, than that. The right kind of ridiculousness.

The fact this comedy-historical has been sequenced directly after last week’s comedy-historical does it no favours either. A compound disinterest sets in. First we had comic book Vikings, now it’s panto highwaymen. These are fun worlds, but ones wherein you feel nothing of true consequence can take place – except in those instances it jumps up a track onto the season arc. When is the show going to get real again?

Aside from the symmetry in the adjoining episode titles, airing them successively also impedes the communication of poor Ashildr’s fate. She’s spent centuries “trapped inside” (as she puts it) her life, watching deaths stack up and love turn to dust. But for us as viewers, her resurrection was one thing the Doctor did, and then their reunion, the next. Squeezing epochs for her into a coffee break for him is a valid shuffle-and-cut of how time travel works in Doctor Who. However, it’s counter-intuitive to appreciating the truth of her situation. If we could have had even one episode in between to put her out of our minds, I think the notion that her monstrous fate was something the Time Lord had barely even considered would have been rendered much more powerfully.

That I remain interested in this immortal is, in part, a testament to Maisie Williams. She segues effectively between emotional flatness, to something close to outright villainy, to a childlike wretchedness. This mercurial quality makes it difficult to truly define her and keeps it interesting. We can quite understand why she might fascinate the Doctor, and challenge him. Then there’s the fact that, despite my griping, she’s mostly extremely well written. Like our hero, she’s the sort of character who makes scenes more interesting, just by being there, and I’m glad there are hints of more to come.

Rufus Hound also does well as the knee-slapping Sam Swift. Instantly charming and endearingly hopeless, his rough and tumble with the Doctor and the ‘Knightmare’ is a superbly staged scene; a Laurel and Hardy cavalcade of trip-ups as the upper hand constantly switches between parties. The banter, too, is quite amusing – all that stuff about the “Slightmare” and the Doctor being Me’s dad. When we rejoin him at the gallows, he continues in good form, Hound’s comedic instincts and bonhomie easily selling the slightly ropey (sorry) patter he’s been given to entertain the crowd. I hope for his return too. Doctor Who welcomes performers who can attune so well to its silliness.

Meanwhile, Clara’s been kept off screen, getting her kicks elsewhere with the Year Sevens and a Taekwondo class. “Did you miss me?” she asks. That happens to be one of my very least favourite sub-witticisms (along with “no pressure!” to communicate entirely the opposite) but it’s apt. Although the Doctor doesn’t ever fully engage with Me’s plight, he has still grown over these last six episodes into an incarnation who can feel longing. Yes, he missed her – and he’s going to.

Until then, off they pop, because it’s Zygons next week, and hopefully a more fulsome adventure for everyone. If that is so, it’ll prove ironic for Me, who we now know will be watching on somewhere in the background. Maybe seething at how rich the Doctor’s life can be, and how empty hers has been thus far.