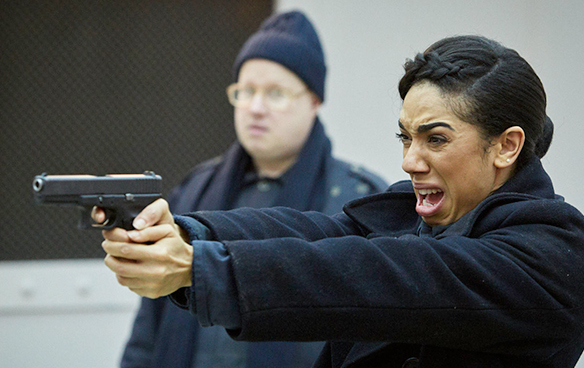 When humanity falls, there will be a lot of milling around on backroads. In woolly pullies. This is the gloomy prognostication Doctor Who has shown us in The Sound of the Drums, Turn Left and The Stolen Earth. And now in The Lie of the Land as, once more, we come outdoors to shuffle despondently. We’re not even getting much vitamin D; alien regimes arise off-season. If you going to join me in a purposeless vigil by the local Magpie Electricals, bring your hat.

Of all Doctor Who’s Earth invasion stories – and how wonderful a series could have such a back catalogue – Toby Whithouse’s might well be my favourite. Sure, like all the others, it surrenders at the end to the requirement to put everything back as it once was (as per the Memory Crimes Act of 1975, presumably instigated to erase the first Zygon invasion attempt), but before we get to that it maintains a powerfully tight focus. Although there are spoof shots of Monk statues in situ around the world, there’s no prolonged attempt at depicting global chaos. No sequence with a mass of lollygaggers falling under a saucer’s shadow – which never really worked for me anyway. Although cropped out of shot, one would always still somehow be aware we were close to the edges of this crowd. But here, we experience the takeover as Bill does, not in the thick of the action, but with helicopter blades, police sirens and baby cries as ever-present background noise. This is the alien takeover as most of us might witness it, which is indoors.

As it happens, our second-hand access to the horrors also informs us of the Monks’ role in their own incursion. Because, as the Doctor points out, there aren’t actually that many friar feet on the ground, and even though this is a boon for the costuming budget, it also plays well with the underlining discussion about propaganda. Which is where the story starts, with the Time Lord seemingly installed as their own Lord Haw-Haw. “The Monks have been with us from the beginning,” he says. “Two species sharing a history as happily as they share a planet”. The show has brought us tales before about rewriting the past – from the Meddling Monk in 1066, to the Master messing around with the Magna Carta – but this is different. This is about falsification, stealing the narrative, and that is a remarkably subtle gambit for a Doctor Who monster. It’s an invasion of our culture, really, which even extends to forging themselves into a Match of the Day publicity picture. Like a Walkers Crisps viral gone bad (*satire*).

Our understanding of our past is, of course, important. While still pretending to be a quisling, the Doctor nevertheless makes the valid point that even before the Monks got here, we were guilty of squandering this resource. “History was saying to you, ‘Look, I’ve got some examples of fascism here for you to look at!’” It almost seems reasonable to hand it over to someone who’ll pay it more heed. Until it transpires that all they really want to do is fill it with selfies.

Other than that… what is actually in it for the Monks? It’s tough to see what they’re getting out of the subjugation of humanity, beyond real estate for their effigies and a parking spot for the pyramid, which by my reckoning, being just east of St Paul’s, means the flattening of a Robert Dyas, an HSBC and – could be there’s a message here – Ye Olde Watling public house.

Their modus operandi suggests they just want to be loved, and maybe that’s all it is. In some respects, they do seem to be simple souls, their devotion to the triangle motif (I wonder if they have a processed cheese preference) akin to pencil-case doodlings of their own logo. Oddly, they don’t have a singular name. ‘The Monks’, even though we capitalise it, is actually a descriptor, but they don’t seem especially defined by a religious belief, so why the cassocks? Perhaps, with their skin problems, it’s to alleviate chaffing. Or maybe they’re a cranially superior brethren to The Headless Monks. It’s strange they’ve been on the go for three episodes, and we’re still none the wiser. But it leaves us freer to project onto them. They come to represent totalitarian states in general, rather than the machinations of a specific species. Near the end of the episode we see the people working on bringing down once of their statues, and of course, our minds are free to take flight to Firdos Square, Baghdad in 2003.

I mentioned we see events from Bill’s point of view, and we hear about them too, thanks to her narration. It’s a very clever move from Whithouse, not only in terms of bringing us into the story, but there’s the satisfying realisation that this adventure has been her recitation of it to her mum, while engaged in mental battle with the enemy. The whole ‘psychic lynchpin’ stuff does feel like cobblers, not in the least due to the inelegance of the nomenclature, but that’s okay. It’s reason enough to stay in her head and, as ever, Pearl Mackie proves more than capable of holding our attention. Her confrontation with the Doctor is magnificently performed – because there was a huge amount of ground to cover for Bill to reach a point where she’d turn a gun on him. Yet, Mackie gets there at a sprint, her character crumbling when she says, “If you help the Monks then nothing will stop them!” You suddenly feel the weight of her six months looking for him, and the despair that it’s ended like this.

Respect, too, for Peter Capaldi, who doesn’t undersell the terrible notion of the Doctor deciding that compromise is an option (“The Romans killed people, and saved billions from disease, war, famine and barbarism”), but then bounces back into full-on flappiness off the back of his fake-out regeneration (and yes, Doctor Who production team, you are all very naughty). The subsequent bit where Bill seems to be facing certain death, and declares, “God, it was worth it!” is a great encapsulation of their relationship, which then merits the likeable postscript from her mentor back at the university, where he lays it out very simply that, to him, she’s special. I make that sound cloying, but it absolutely isn’t.

Woven through this fable of falsehoods and faked narratives is, arguably, an even greater act of revisionism – the progress of Missy. While I don’t understand the storytelling decision to inform us, before showing us, that she was in the vault (and I guess, I’m therefore still hanging on with the assumption that this information will be later subverted), the conversations she’s having with the Doctor within its walls are fascinating. Even if it transpires that, like our hero with the Monks, she’s faking her conversion, it cannot be denied that she is “engaging with the process”. She says to him: “Your version of good is not absolute. It’s vain, arrogant, sentimental…” That’s a point of view, a valid point of view, which comes from active participation in their discourse.

And, actually, I’m going to say it: I think the Doctor’s “best enemy” really is trying to change her ways, because this is not a simple conversion to the light. Missy is still definitively Missy (that Celebrity Love Island remark), but with a thousand years of work, she’s beginning to countenance something that’s lain outside her comprehension: remorse. “I keep remembering all the people I killed,” she says, and there’s a tear. Which will have to do for now for Gooch in Terror of the Autons.

This is where the story ends. Two old acquaintances in the glow of a Calor Gas heater, in an unlikely conversation. Following the Doctor’s chat with Bill by the statue remnants in Bristol, it’s another brief moment where the truth has come out.